So, I’m getting kicked out of SF at the end of this month, and I’m not sure when I’ll be moving back, so I’ve dedicated a little bit of time to a place everyday to go and do some drawing! 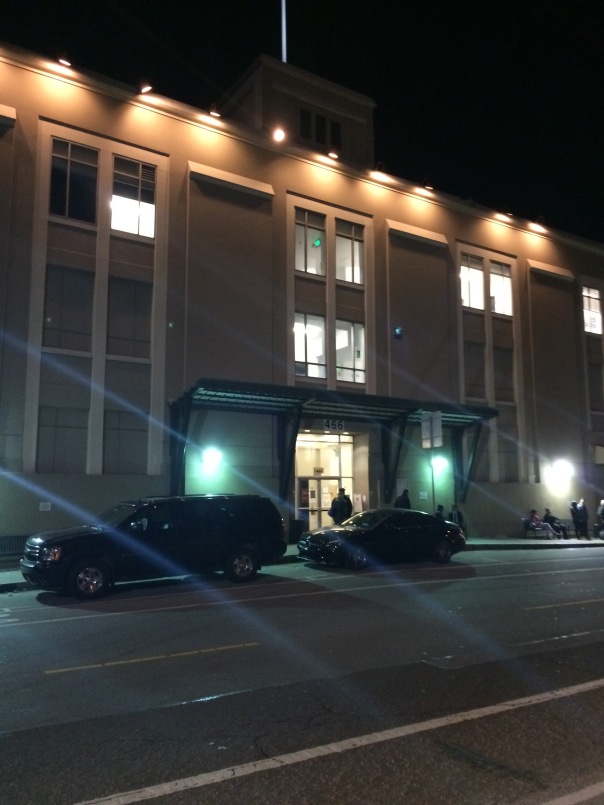 I decided to start my run of 30 days of drawing with a trip back to where it all started for me during my time living here in San Francisco- the townsend building at AAU. Hundreds of us wannabe illustrators all met each other for the fist time here with wide-eyed optimism at the starting of a long and hard race in which very few of us had any clue how to finish. It was almost like getting hit with a very cold bucket of ice water: once the shock of the initial wave wore off, the deep chill of knowing what it meant to be a professional artist sunk in. Not many of us knew how much grit it really took to be an artist, and not many of the people who started off in this foundations building actually made it out of it, and after about a year and a half, most everyone you had met going in were going out the same door with their heads hung low.

I had gone in without ever having even touched a piece of charcoal, or done any real studying of anatomy or anything of the like. To say the least, I started off very rough. These were some of the best years of my life though, with teachers like Jon Dalton, who would crack me up for hours with his pro-level trash talk; or Larry Z  having later dropped the Larry from his name) who was nothing less than a samurai when it came to his craft. I was still working as an electrician, so I came in with the nights and weekend crew, and there were many endless 24 hour work days in which I would sometimes believe that I was going crazy. Piles of colored swatches and struggles to get that elusive A- would become more like 10 round boxing matches, and almost all of my other hobbies in life melted away. Playing in bands and going to bars quickly became things of the past. During this time in my life, everything boiled down to getting the job done and becoming good at what I did, and that lesson has stuck with me throughout all these years.  Walking around the building today made me wonder what had happened to some of the people that I had known during this time, friends that were about as close to me as anyone that I have ever known because of the struggles we had getting to move on from the townsend building to the good stuff at AAU. There is one thing at the building that still hasn’t changed though, and that is this: 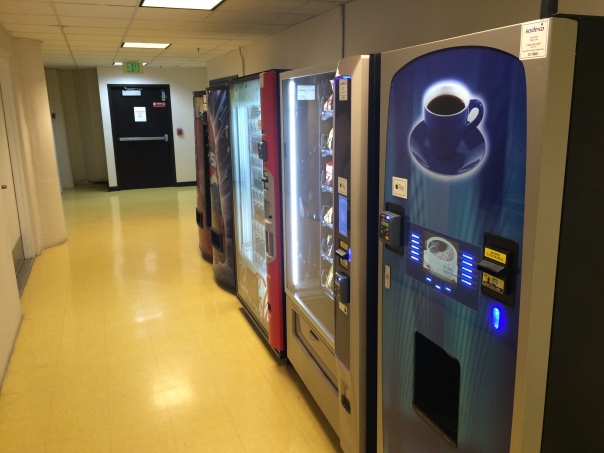 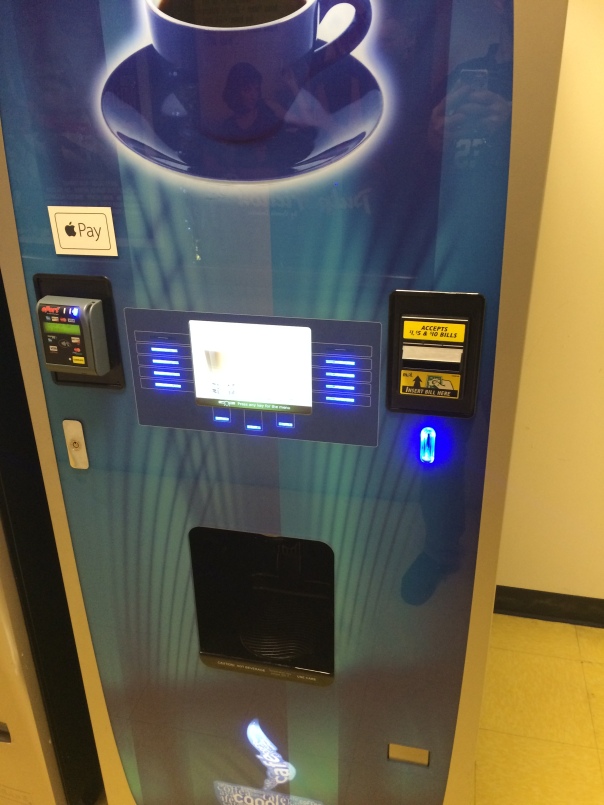 The coffee machine in the basement. Oh, how I love you, machine. I still have all the gold dollar coins you used to spit out for change, and I promise I’ll never spend them.

As for the drawing that I worked on today? I had gone into this building having started my comic that I had named “Liberty” and today I found it fitting to work on my newest, and infinity better comic “Popapocalypse.” It was a fitting way to say farewell to a building that I’ll always remember fondly. See ya later Townsend! 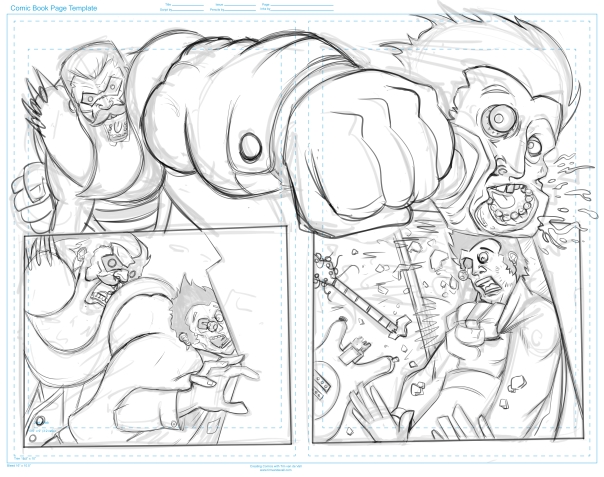 Recently I was contacted by the coolest charity in the world, Superhope. They’re an organization that just started to do work in California at the hospital in Stanford, working with children suffering from cancer. They contacted me through the school, and asked me if I wanted to take part in it, which of course I did! Along with my friends Ha and Lanie, as well as many other very talented video photographers and costume designers, we went to Stanford and interviewed these very amazing kids with the intent on having them guide me through designing a super hero character for each of them. With their input and guidance, I then designed costumes, which then went to the costume designers to build for the kids. Here’s just the first look at some of the awesomeness that went down. 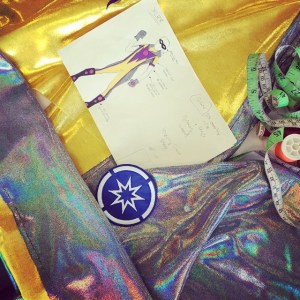 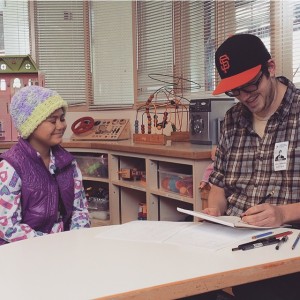 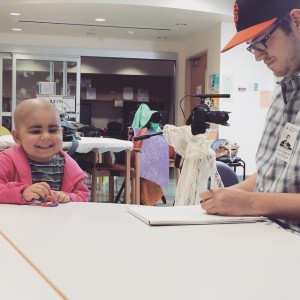 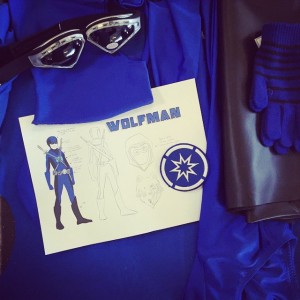 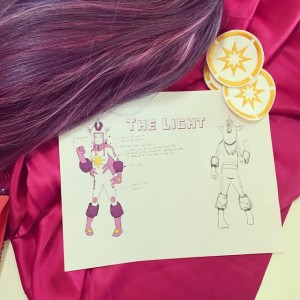 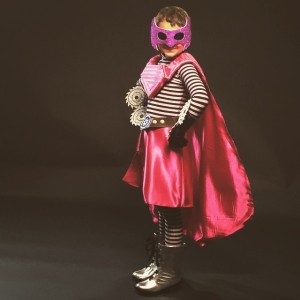 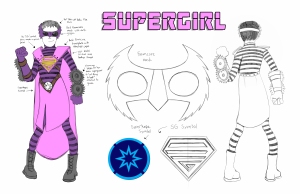 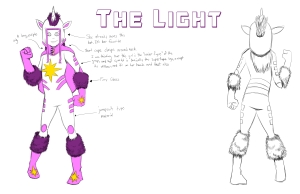 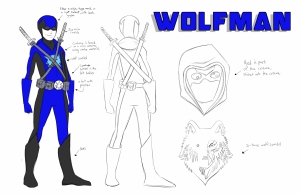 Hey bruhs, I write from within my vacation to Hawaii! I’ve been busy at work getting Popapocalypse issue one finished, which it will be very soon, but in my off hours I’ve been doing some light sketching. Here you go! 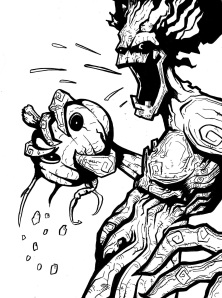 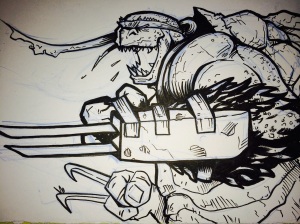 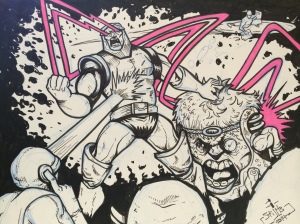 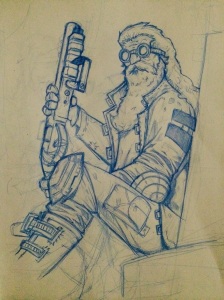 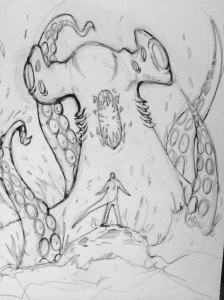 This last Friday I went with a buddy to see Pete Holmes, and it was hilarious! I drew a skechcard for him with his prof x character giving the middle finger. 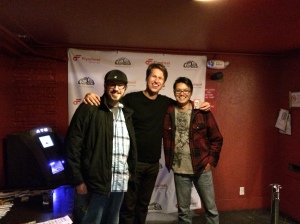 Me, Pete Holmes, and Lloydo

The next day I had to get up real early-like and drive all the way out to San Jose to see one of my best friends graduate at the SAP Arena. I managed to get this done from the bleachers. 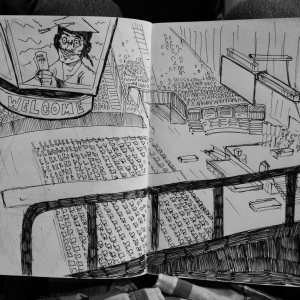 And here’s what I gave him for his graduation gift. A wolverine sketch cover! 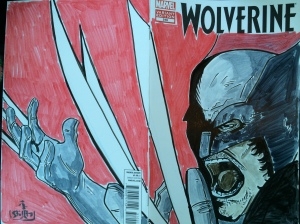 Check out this awesome trailer for Popapocalypse that a good friend of mine, Josh Idell has made!

He did so good on this, I think I’m going to be using his talents in the future for many years to come. If you ever need anything made, please get a hold of me, or of him!

For those of you who know me well, you know that the Hellboy universe is the best universe, hands down. I’ve been a major fan for a long, long time, and as you can imagine I spent a couple of the hours that I had free today participating in at a local comic shop- in this case that incredibly amazing Mission St Comics, off the corner of Mission and 20th- doing drawings and talking everything Hellboy with anyone who walked in through the front door.  I managed to take a picture of the drawing I did while I was there, and if you go to Leaf’s comic store, you’ll probably see it in there somewhere. 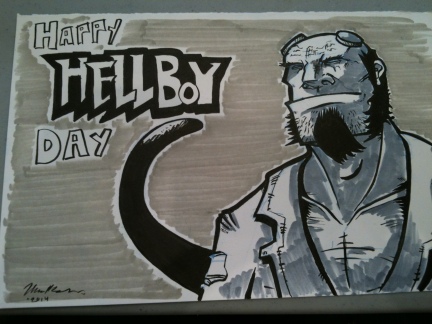 I also wanted to take a second to show off some artwork on people working on some HardingWorld stories right now. The first one is from Ha Huy Hoang, the very talented and prolific artist working on Godspeed. 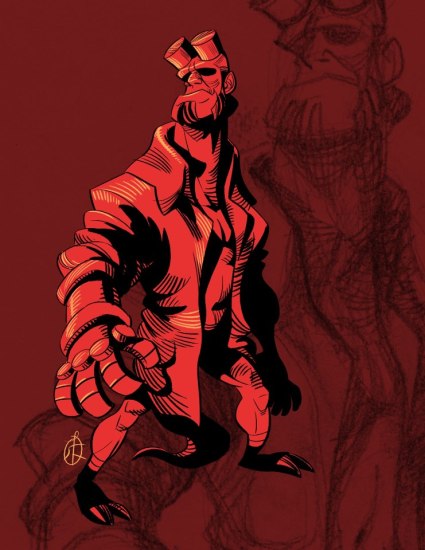 This next one is from the creative mind of Malcolm Ra Johnson, the badass illustrating the soon-to-be-finished story Styx. 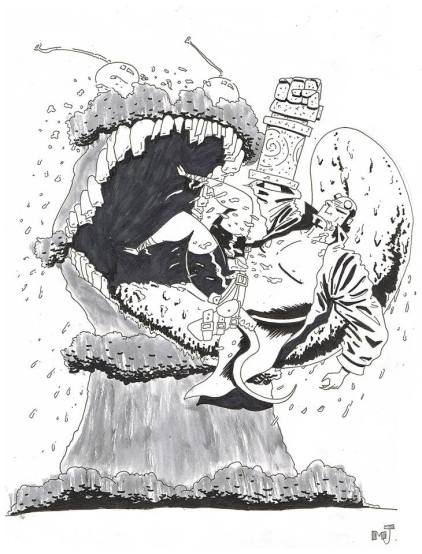 Emerald City Comic Con is just a week away, and while I work away at the newest Treatment issue, I’ve managed to find a little time here and there to work on some of my prints that I’ll be selling at the convention. They of course feature my main characters for Popapocalypse, which I hope to use to get some interest brewing for my kickstarter that will be starting up that weekend. Here’s a preview of the print series that I’m working on: 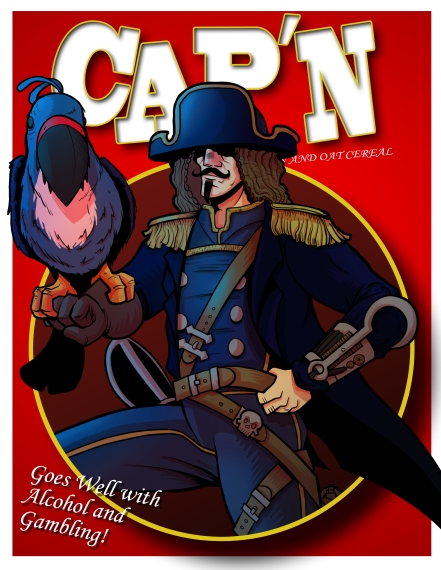 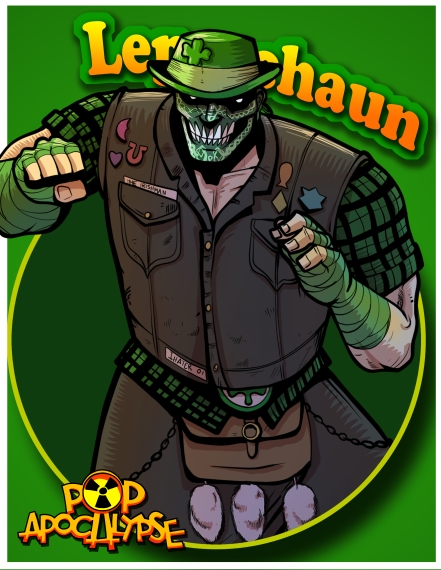 So, I’ve been saving this POPAPOCALYPSE character for the holiest of all Irish holy days, and here it finally is. The IRISHMAN! That’s right, this character will show up whenever a black rainbow arches over the ruins of POPAPOCALYPSE, and whenever he arrives he is looking for one thing, and one thing only: his lucky charms.  He always arrives like a freight train, boxing his way to his prize, yet never finding it. He’s been poisoned, stabbed, decapitated, and riddled with bullets, but still he returns whenever a black rainbow appears. And he’ll keep appearing until he is reunited with his stolen lucky charms. 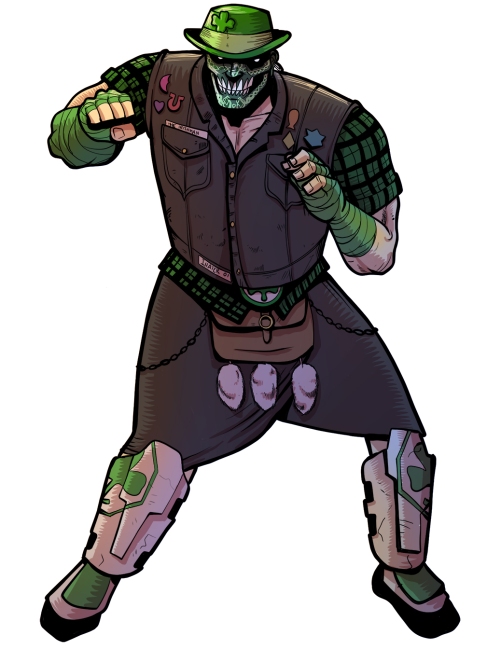 I have some new, awesome Klondike Concept Stuff from Ha to show you all! Check out this finished full-color depiction of the Space-Cop Klondike! Man, it’s awesome! 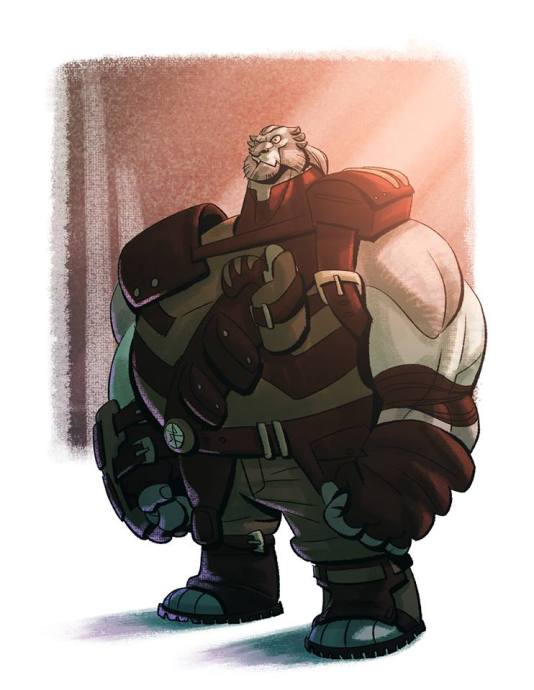 And here’s some finished expression for the good old space bear for you to enjoy.  Ha has really captured this character with these drawings, and I personally can’t wait to see what happens from here. 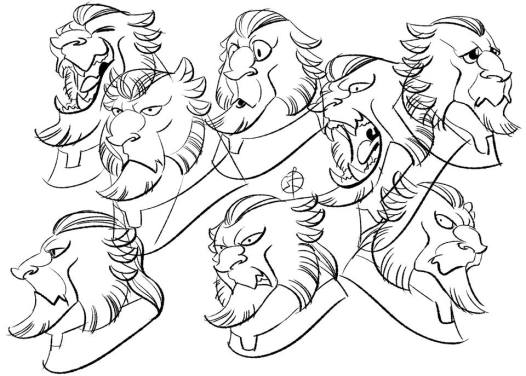 Hey, not much going on in my world today, but I have some color roughs to show you featuring the Captain and the Rabbit in Popapocalypse. Enjoy?

The general consensus on this one was version number 4.

And this one would be number 1, minus the really tight pants.